Reprinted with permission from Watch the Line.The author previously worked as a state pipeline inspector, working in conjunction with the Federal Pipeline and Hazardous Materials Safety Agency (PHMSA). The author requested anonymity.

I became a state pipeline inspector to protect the public. Inspectors are charged with inspecting each oil, gas and ammonia pipeline in the state for compliance with the federal codes on such things as pipeline construction, operations, maintenance and public awareness.

Each time an accident occurs – whether it results in small environmental harm or a death – new regulations are written to prevent that failure in the future.

The Minnesota Department of Natural Resources (DNR) and the Minnesota Pollution Control Agency (PCA) have utterly failed the public in proactively explaining what is happening on the ground regarding Enbridge Line 3 pipeline construction.

Water protectors on the ground still see problems along the route and struggle to get answers.

It’s the state’s job to inform the public about matters of great public interest. The state’s lack of transparency is inexcusable and infuriating.

The missing narrative in ‘Angels Unawares’

On Friday, the sculpture “Angels Unawares” arrived in front of the Minneapolis Basilica of St. Mary, an effort to call attention to both the suffering and sacredness of immigrants and refugees and the importance of welcoming them with an open heart.

The statue is a replica of one commissioned by Pope Francis, installed in St. Peter’s Square in Rome in 2019. It was the first new sculpture in the Square in 400 years. A replica statue is on a U.S. tour; previous stops included Boston and Miami.

The sculpture includes 140 immigrants and refugees crowded on a boat, representing different cultures from different historical times. Its 140 figures echo the 140 statues of saints on St. Peter’s Square.

By Vic Rosenthal and Scott Russell

Sarah (not her real name) was a teenager in Radom, Poland when Germany invaded her country in September, 1939, the start of World War II.

Now a U.S. citizen in her 90s, she remembers living in extreme poverty and constant hunger in the Radom ghetto. Many men were taken away and never seen again. Sarah was forced into slave labor, her brother taken away. She and her mother were sent on a death march to Auschwitz and later Bergen Belsen.

“More than five years in ghettos with poverty and starvation and two death marches, but I survived,” she said.“I don’t know how.”

State issues MMIW report, and other new and events

Here’s what to expect and ways to claim your power.

A litany for those who aren’t ready for healing 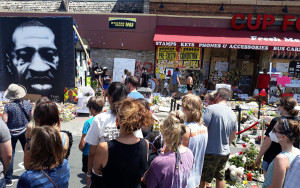 People gathered Sunday, June 7, at the site where George Floyd was murdered.

Four years ago yesterday, July 6, Philando Castile was shot dead by St. Anthony police after he was stopped for driving with a broken tail light.

One of the officers asked Castille for his drivers license and registration. Castile informed the officer that he had a firearm (which he had a license to carry.) When Castile reached for paperwork, an officer shot him seven times at close range.

Hundreds of people gathered at Luther Seminary for a Service of Prayer and Lament honoring Castile’s life, one of many such services. A particularly moving part was a reading by Afro Christian scholar Rev. Yolanda Pierce called “A Litany for those who aren’t ready for healing.”

I came across it again today. Given George Floyd’s murder and the…

4 Steps to the Future

I am pleased to announce that my new book, 4 Steps to the Future, is now available on Amazon.com!  The book is intended as a field guide for managers, providing them the process and tools to conduct their own basic foresight process within their own organization.  It was fun to write and I’m looking forward to learning how it helps individuals create foresight!

As mentioned in the book description, the book is:

…a practical, straight-to-the-action guide for creating foresight in your organization. Written for today’s attention-stressed and resource-deprived manager, 4 Steps to the Future provides an easy-to-understand process for creating insight about the future that individuals can immediately begin applying in their organization.

The book comes complete with exercises to conduct in your own workshops and includes worksheets designed specifically for the 4 Steps process.  Full size versions of these worksheets will be available for readers to download on… 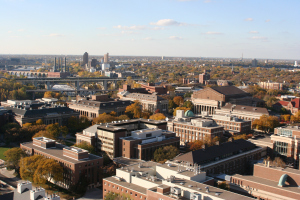 Aerial view of the Northrup Mall on the U. of M. Campus. Photo by Ben Franske, posted on Wikimedia.

The University of Minnesota is one of the country’s original land-grant institutions and proud of it, its website says. Yet where did the land for the land grant come from?

This Day in History, May 8, 1906: The Burke Act passes, more Indigenous-held lands lost

On this day in history, May 8, 1906, Congress passed the Burke Act, which became another vehicle for white settlers to get Indian-owned lands.